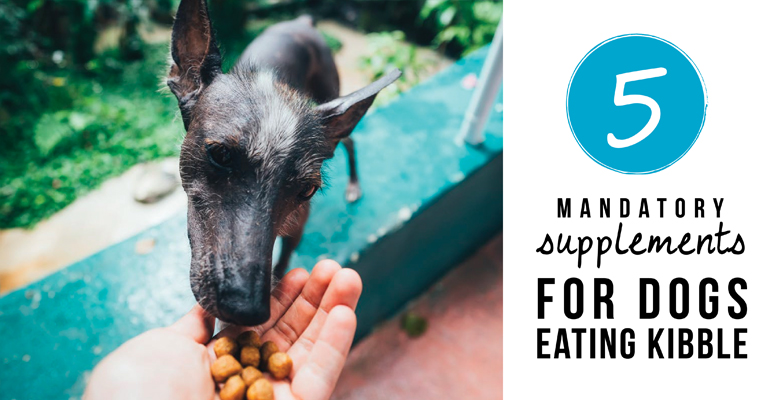 Why is supplementing important? When do I start? How do I even know it’s working?

All valid questions! Let’s start with why it’s important to supplement using this entirely made-up but altogether likely story of a dog fed a lifetime of kibble.

That kibble-fed dog missed out on a number of nutrients that were crucial to his health and wellbeing because they just aren’t found in processed, shelf-stable pet food.

Supplementation would simply aim to add missing ingredients not being met through diet to support health and wellness because at its core, supplementation is really about preventative care. It’s a concept that anyone who brushes their teeth or gets their oil changed every 3,000 miles(ish) is familiar with– the goal is to address something before you’re met with issues.

Okay… but when do I start?!

Dogs are resilient so you won’t see issues at 1 or 2 years old, maybe not even at 5 years old, but when you can actually see the symptoms, their bodies are already in trouble and that’s why you don’t wait to just manage or patch the issues. You want to start supplementing their diet as soon as you can. If they’re weaned, they should be getting supplements on top of their kibble.

Oh, my stars and stripes. I’m too late. All is lost.

Breath in through your nose and out your mouth. Repeat that three times. Go on and shake out your shoulders, get your hands in on it too, shake them out. Relax.

It’s never too late to start.

Every single dog (and cat!) can benefit from supplementation at any age. Whether you add a probiotic to their bowl at 5 months or 5 years, that dog’s g.i. tract gets all the benefits probiotics offer.  (Trust me when I say you’ll know if room-clearing toots stop.) 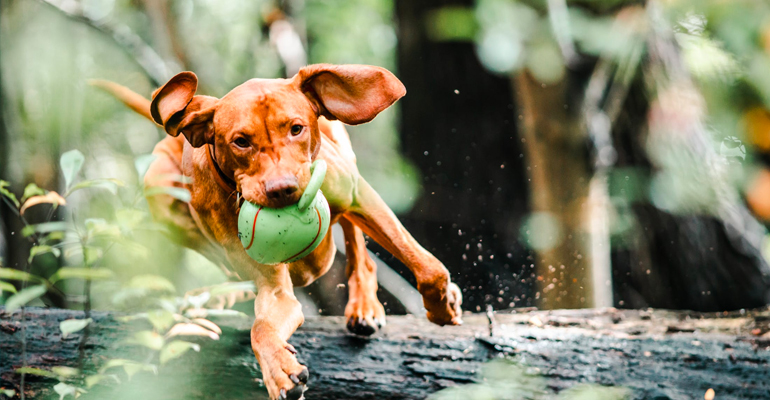 In the wild if a dog devoured his prey, he would eat the joint capsule, joint fluid, and the cartilage caps of the bones. After ingesting it, it would nourish his joints providing them the building blocks needed for joint health: glucosamine, hyaluronic acid, and chondroitin. Glucosamine can be thought of as the precursor to chondroitin and hyaluronic acid. Chondroitin is the spongy part of the cartilage, giving cartilage its structure and the ability to resist compression. Hyaluronic acid is a component of synovial fluid that lubricates joints and helps to reduce friction between those joints during movement.

Here’s the rub (*wink*). There is no kibble in existence that has adequate levels of joint-supporting ingredients like glucosamine, chondroitin and hyaluronic acid. Do not buy into any dog food with joint supplement claims. If your pup is living on dry food alone, they need an alternative source for these joint fluids, and they won’t find them in a bag of kibble.

Add whole foods like fermented fish stock or raw chicken necks to their diet or consider a joint supplement that offers therapeutic levels of glucosamine and chondroitin, MSM, hyaluronic acid, and anti-inflammatory herbs to cater to all of the components of a joint – synovial fluid, connective tissue, and cartilage. 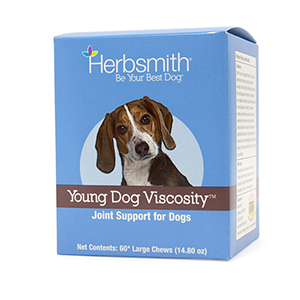 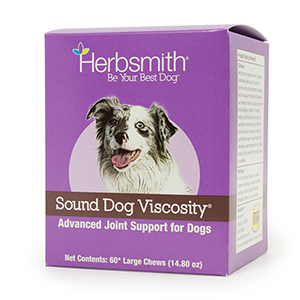 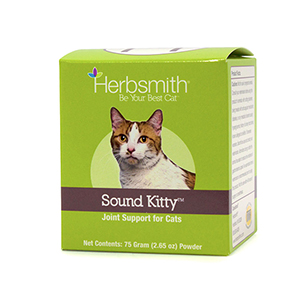 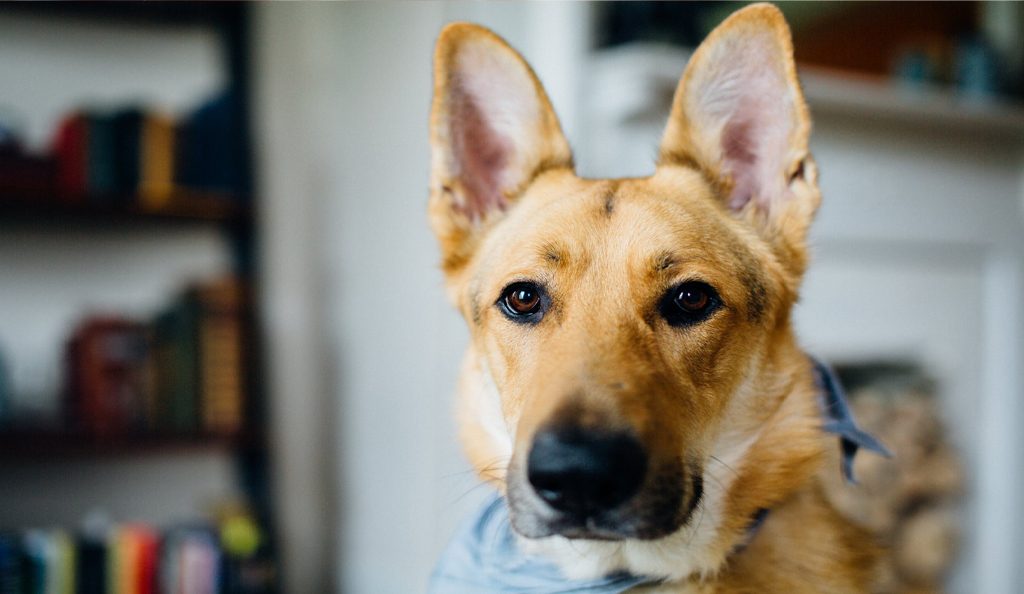 *Fair warning, there is a bit of biology talk on the horizon. Now is the time to sip that coffee because we’re wading into the thick of it. *

Omega 3 and Omega 6 are polyunsaturated fats known as “essential” fatty acids. Omega 3s and 6s are vital to your pup’s diet because he can’t produce them on his own. Omega 3s reduce inflammation, just some of the many benefits of omega 3 for dogs, and Omega 6s facilitate normal growth and development, including skin and hair growth, bone health, and metabolism. Omega 6s also just so happen to promote inflammation, which isn’t always a negative, but it does mean that a diet also has to have Omega 3s to balance the 6s.

The majority of shelf-stable food, kibble in particular, lack adequate amounts of Omega 3-fatty acids. Omega-3 fatty acids are expensive, and they aren’t shelf-stable. It’s difficult to be able to get enough Omega-3 fatty acids in a dry kibble that has gone through a high-temperature extrusion process, which is how the majority of kibble is processed, mind you. And because its expensive, most pet food companies aren’t adding Omega-3 fatty acids back into their pet food after processing. In fact, most of the polyunsaturated fats that are in a guaranteed analysis comes from those Omega 6s we just got acquainted with– the fatty acids that tend to be pro-inflammatory. 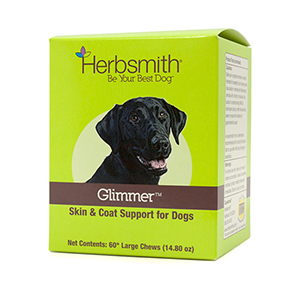 There’s no such thing as too many Omega 3s. It builds skintegrity, and the compliments about his coat are a little perk.

#3 A Healthy Gut is a Happy Dog 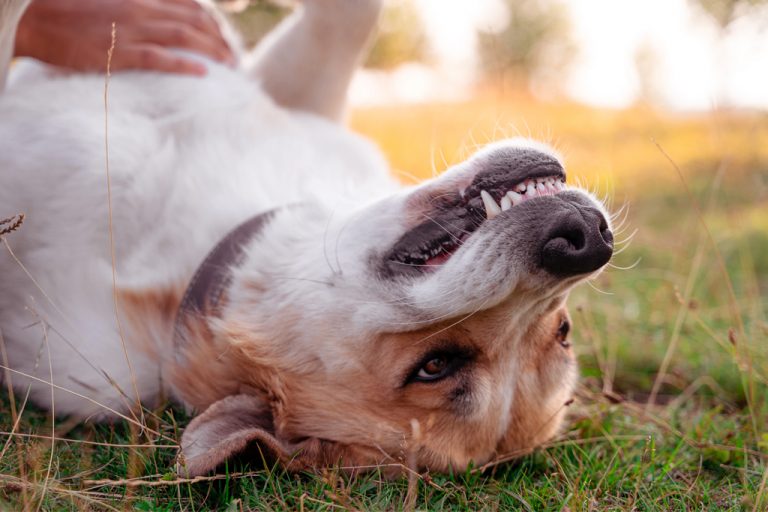 In shelf stable foods like kibble though, the FDA has a zero-tolerance policy for bacteria within the food and that’s any pathogen- E. coli, listeria, or salmonella. In the process of eliminating pathogens, good, healthy bacteria that’s necessary for a good gut biome is also destroyed. So, when you’re feeding a sterile food, you’re not giving them pathogens, which is great, but you’re also not giving them the beneficial “good” bacteria that the gut biome needs.

Pet foods have begun adding probiotics, which is a step in the right direction, but you have to question the efficacy of them. Most probiotics on the market are live microorganisms kept in a dormant state. Keeping them dormant until they’re ready to be used ensures that the dosage and potency are uniform because they have such a limited lifespan- 2 weeks to be exact. As soon as they come in contact with moisture, even from the air, they come to life. If they aren’t packed and sealed (think about how often you open that bag of kibble), there is a real chance that those beneficial bacteria will be spent before your pup even has a chance to benefit from them.

That’s also assuming there was enough probiotic to begin with… The best probiotic for dogs has enough culture-forming units (CFUs) to travel the entire digestive tract, from the stomach to colon, so your pup has the support he needs. A probiotic should also be accompanied by prebiotics to feed those probiotics so they can reproduce and outnumber harmful bacteria. 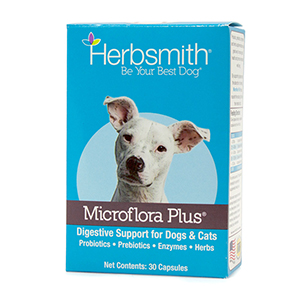 I always know when “someone” forgets to add Duck’s probiotic that day because he does a downward dog stretch within nose reach.

(and why it isn’t just about doggy breath) 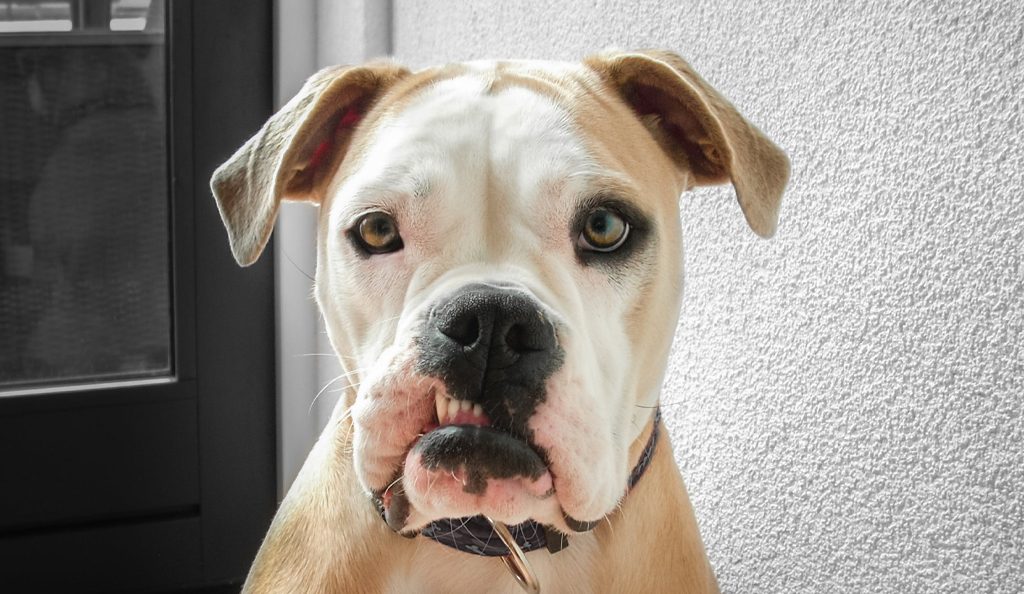 As carnivores, dogs have physiological traits developed specifically for what they’re meant to eat. They have tightly-interdigitated teeth for ripping and tearing prey, a shortened gastrointestinal tract to digest raw meat, and little to no salivary amylase (i.e. the enzyme that breaks down sugars or carbohydrates). So, dogs eating kibble tend to consume more carbohydrates which contributes to dental tartar.

That breath-takingly unbearable doggy breath for example, is often due to tartar buildup and bacteria on the surface of the teeth. Tartar is a lovely combination of minerals, food particles, and bacteria that likes to gather at the gingival surface where the tooth and gum meet. When the gum line becomes irritated and inflamed it leads to gingivitis. Once the gums are irritated and swollen, bacteria are free to make its way into the bloodstream which can cause a whole host of issues. That’s why oral health isn’t just about that foul doggy breath.

To address the tartar buildup that’s already there, consider dental chews for dogs that tackle tartar at the upper gumline, where bacteria like to cozy up. 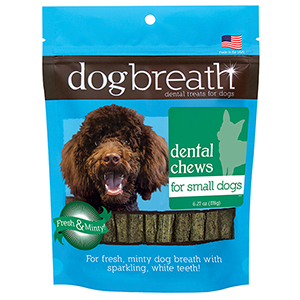 More than a Breath Mint

Oral health is checked off with a toss and a pat on the head.

Go Ahead, Toss Them a Treat >>

#5 A Daily Dose of Antioxidants 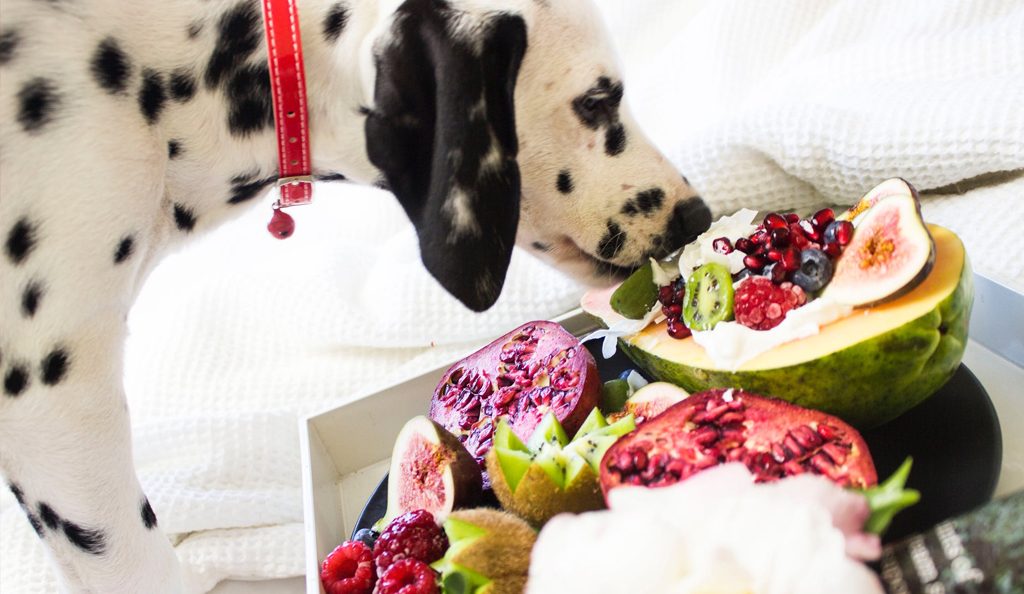 While I’d encourage every pet parent to toss fresh food into their pup’s bowl at every age, this one becomes exponentially more important for aging and senior dogs. Antioxidants can come from either what we produce in our own bodies as well as what we consume in our diets. As we age, our own endogenous antioxidant levels start to decrease and if we don’t increase our dietary antioxidant levels, then our bodies are open to damage from free radicals and oxidative stress that leads to premature aging, to cancer formation, that leads to hypersensitivity of the immune system which is damaging to good cells as well as bad cells. Supplementing antioxidants can be as easy as adding brightly-colored fruits and vegetables to their bowl every day. Or consider antioxidant supplements with incredibly concentrated amounts of antioxidants from whole foods.

Joint care, more omegas, gut health, pearly whites, and a daily dose of antioxidants– these are easy additions to help every kibble-fed dog live a more vibrant, healthy life. Be proactive: toss blueberries into that bowl, google fermented fish stock, add a probiotic, for the love of dog, get going already! 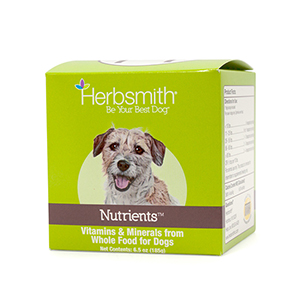 A Daily Dose of Health

This is absolutely the #1 thing I’d add to a dog’s dish to boost nutrition. It’s cram-full of concentrated levels of vitamins and minerals from whole foods.

Give it a Sprinkle >>
150
SHARES
ShareTweetSubscribe 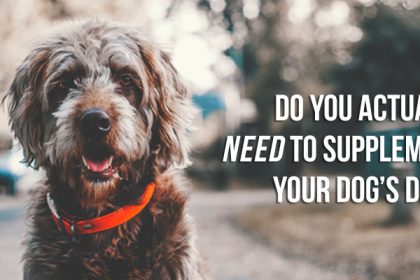 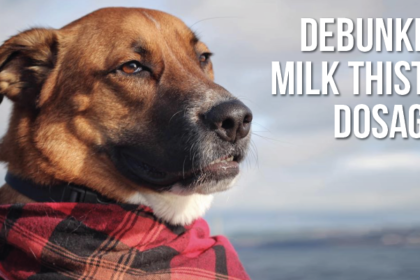 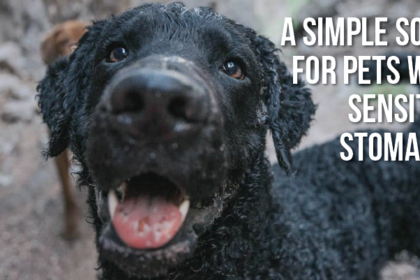 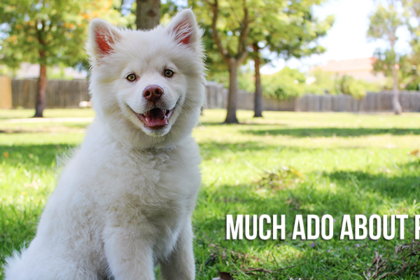 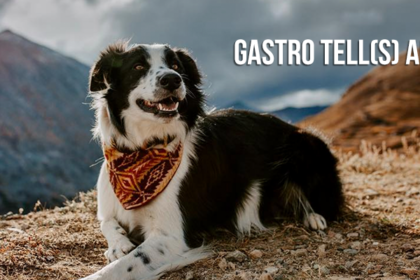 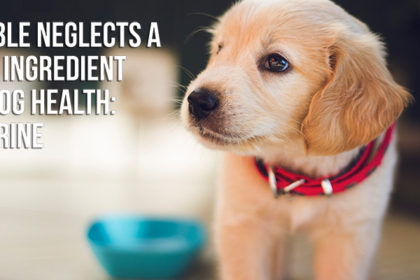 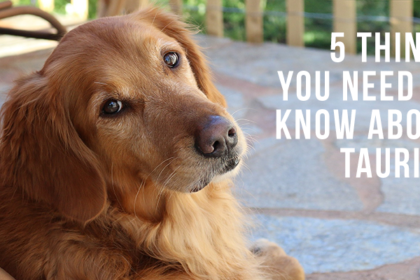 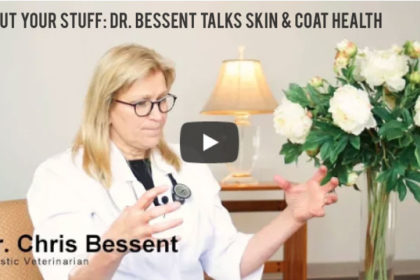