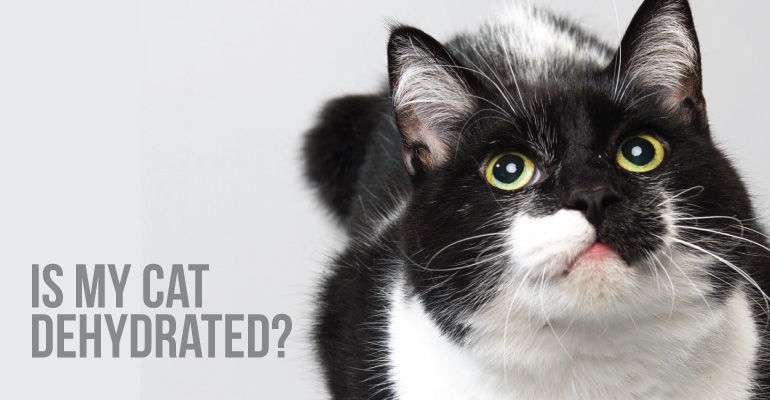 Is my cat dehydrated?

Your kitty may be 100% sass, but physically she’s 80% water (or she should be). Cats are especially prone to dehydration, which happens when their percentage of water drops below normal levels. Though its much more obvious when a dog may need water because of panting, cats don’t always wear their thirst levels on their fuzzy sleeves.

In fact, in the early stages of dehydration, cats may not even know they need a drink either. The thirst center in a cat’s brain is not nearly as active as in a dog’s. Add on top of that a diet consisting of exclusively dry kibble, and that cat is most likely chronically dehydrated.

The reason cat owners give their kitties wet food (other than the fact that its often more appealing to picky cats) is because of the moisture content. Cats do not drink much water from their water bowls because typically, they would obtain the majority of their moisture from their prey. But as they’ve become domesticated, cats aren’t eating fresh, raw prey. Hence why canned food has become a staple for kitties.

Is my choice of food dehydrating my cat?

Dry cat food contains, on average, 10% water, while canned food can contain up to 80% water. Dehydrated food has a smaller initial moisture content, but requires a good amount of water added to rehydrate the food before serving.

Cats should be getting about 260mL of water a day on average (a little over a cup). A half-cup serving of generic dry food only supplies a kitty with about 12mL of their daily water. That’s nothing! And a single-serving-size generic canned food supplies kitties with 88mL of water. Far better than dry kibble, but it still leaves kitty with a big gap to her daily requirements, even with serving her two canned meals a day.

An even better option is a dehydrated or freeze-dried cat food (with the recommended added water of course!!). A half-cup serving of this type of food plus the half-cup of water mixed in equips kitty with about 120mL of water per meal, helping her reach about 240mL per day. (Requiring much less water to be lapped up straight from her water bowl each day).

One meal of dry food gives kitty less than 5% of her daily required water. Which means after her two daily meals, kitty has only received 10% of her necessary daily water intake. 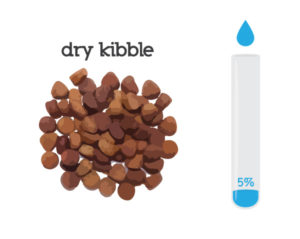 One meal of canned food gives kitty about 34% of her daily moisture. After her two daily meals, kitty has received roughly 68% of her required daily water. 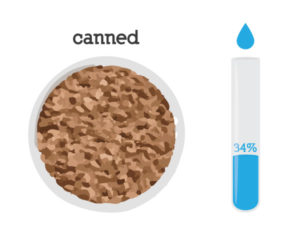 One meal of (rehydrated) dehydrated food gives kitty 46% of her daily water. After two daily meals, kitty has received about 92% of her required moisture. 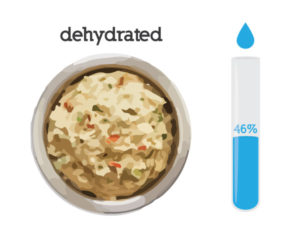 How do I know if my cat is dehydrated?

Regardless of what you feed, here are some ways to tell if your cat is dehydrated:

When in doubt, let your vet check her out.

If you think your cat may be dehydrated, the best thing you can do is take her to the vet. Your vet can properly assess your kitty and give you advice on how to get her back to normal hydration levels. 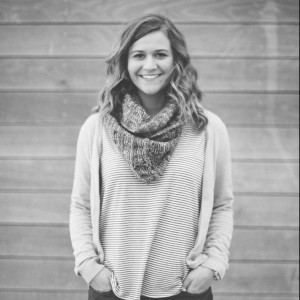